Kyle Crick takes the mound for Los Escorpiones de Scottsdale in the Arizona Fall League this afternoon. It’ll be Cricky’s 3rd start in the fall league, and he’ll oppose Andrew Heaney, the former Oklahoma State lefty (and top 10 pick) who ranks pretty high in the Marlins’ system. So you’ve got Crick, the prep righty and Heaney, the college lefty, squaring off for a pretty sweet showdown between highly regarded hurlers. Neither will probably last more than 3 innings, but I’m interested to see whether or not Crick can command the strike zone. The Giants top minor league arm struggled in his first start for Scottsdale, but bounced back with a nice 3-inning effort in his last outing, allowing a run while striking out 5. If you’re scoring at home, that’s 5 bb and 9 k in 5 innings of work for the hard-throwing righty, who just happens to be one of the youngest players in that prestigious AFL. He’s been pumping 94-97 steadily in both starts. Here’s the link to MLB.com Gameday if you want to check in on Crick and the gang this afternoon.

For the Giants, Jarrett Parker (2nd) and Andrew Susac (6th) are both in the lineup for the Scorpions today, who play at 12:35pm Mountain Time. Angel V. sits – I don’t think all three hitters have been in the same lineup through the first 10 games, although they’ve all had some early contributions. Susac was the star last night, starting behind the dish and smacking a 2-run HR as part of a 3-hit night. Susac had been showing some nice plate discipline early, but last night’s blast was his first flash of power in Arizona. That game, which Scottsdale claimed 5-1 over Glendale, was the radio game of the day… I believe Bernie Pleskoff was one of the guys on the mic, so I’ll be interested to see if he puts together a short write-up on Susac. He’s pretty good about things like that, and I’ll post a link in my Twitter feed if I find anything.

Here’s a quick rundown on how the Giants are faring in the AFL.

Kyle Crick, RHP – 2 GS, 5 IP, 7.20 ERA, 5 BB, 9 K: Looking to string a couple nice starts together, but velocity has been there. Needs to keep working in the hitter-friendly environment.

*Update: Scottsdale beat Glendale 5-1, and six of the seven Giants farmhands took part in the action. Crick showed the good and the bad in less than two innings of work, breezing through the first with 2 K and a fly-out, but allowing a solo shot and walking the bases loaded in the second. Crick was pulled in favor of Mejia, who had a coming-out party with some brilliant relief work. The young lefty allowed only one base-runner in 3.1 IP and fanned 5. Mejia had struggled a bit in his first few outings, but this should give him a nice boost of confidence.  Crick left him with a pond full of ducks in the 2nd, and Mejia was nails with a 3-pitch K of the Glendale leadoff hitter. Cody Hall and Derek Law pitched scoreless innings out of the pen. All together, the Giants pitchers combined to toss 7 innings for Scottsdale, allowing two hits and one run. They struck out nine. Susac stayed hot at the dish, reaching base 3 times and driving in a run with a sac fly. There’s a nice recap from MLB.com that focuses on the performances of Crick and Mejia here… a good day for the Giants youngsters, even if Crick didn’t have his best stuff. 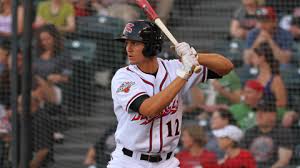 I'd love your feedback! Cancel reply